The sunset a week ago was sensational and golden – the light hummed.

Pictures are a meager reminder, but pretty enough to post. From the driveway, looking west across the cul de sac: 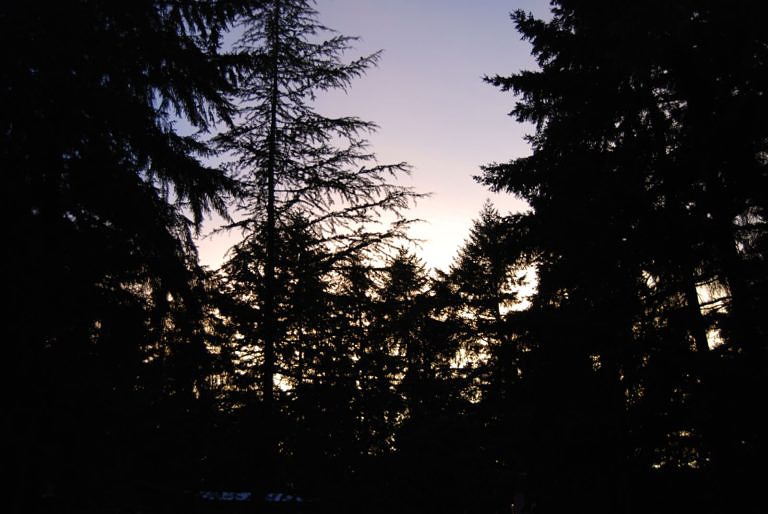 And looking north up the street: 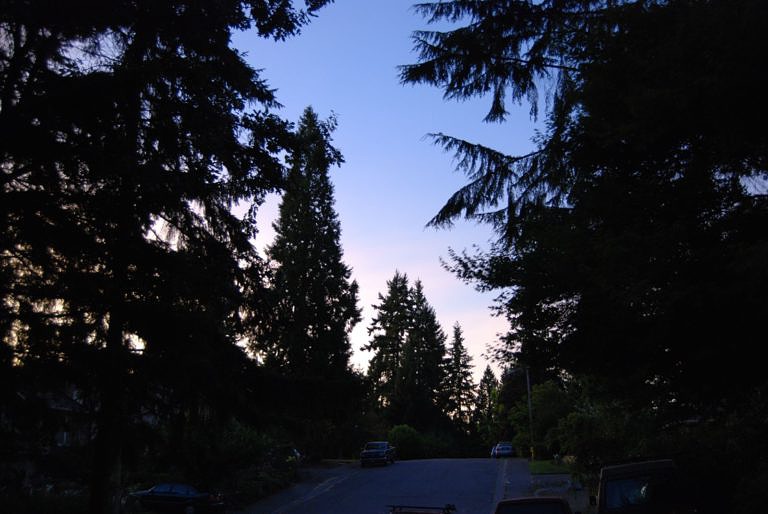 I love our house, neighbourhood, and proximity to everything (especially work), but every time I try to take pictures of the sky I understand why I sometimes feel so hemmed in here. Quite the change from our apartment up on the hill overlooking the lake. Generally it just feels cozy, but man are those trees tall.

We’re faced with a particular challenge regarding the trees now that football season is nigh. We’ve been essentially living without a TV since we moved in, mid-October. We have internet and cable through Comcast. No love lost there, both for endless billing snafus and general quality of service. In our old apartment, Kevin actually bought an HD antenna and connected it straight to his computer, and we used Media Center piped through to the TV to watch our shows on the networks in HD. No ESPN or Fox Sports, but otherwise everything that we wanted. Meanwhile, we kept calling Comcast to cancel our cable tv altogether, and they’d give us a six-month package analog cable package that was cheaper than internet alone. So we went from a $125/month cable+internet package to a $50 analog-tv+internet package. Nice.

When we moved to our new house and for the first four months, our TV room was in total disarray – no walls, the storage dumping-ground of the house, etc. The TV was occasionally plugged in, but we found that when the TV was connected our precious internet was spotty. (I may have some of these details wrong – Kevin is the wiring expert – but this is the gist of the situation.) The Comcast guys came out to test the line into the house, which seems to be functioning perfectly, so it’s likely the house wiring that’s the problem. Kevin did some analysis and there were several splitters (which degrade signal strength), plus signal gets weaker over longer lines, plus he suspects that the coax cables that run through the house are damaged/inferior. Back in March or so, Kevin unscrewed the TV connection where it entered the house to boost our all-important internet stability. So no TV until we reconnected for the Olympics, and now we’re mere moments away from football and needing a solution. Kevin just bought a spool of coax cable, and he’s been researching roof-mounted HD antennas which he could wire down to the utility closet that holds all of the house networking. My understanding is that the cable could go to the closet, which connects to his computer via the cable he ran last winter, which connects back through the closet to the XBOX 360 (a Media Center Extender) and so we could watch TV in the family room. (I sometimes feel like I should make an effort to understand this better, but he’s so good at it that I just trust his judgment and wait for the TV to turn on.)

The only hitch in the plan is that we are surrounded by enormous trees. Kevin bought a compass (on sale at REI!) and spent a good while up on the roof scoping out the visibility in the appropriate directions. It *might* work. We also had a tree guy out to give us estimates for removing some of the behemoths around the house, so that also might help further the plan. (In terms of feeling hemmed in, I felt very justified by his evaluation – our trees are between 65 and 100 feet tall. Wow!) We’re a bit conflicted about priorities for tree removal . We can only take out four per calendar year, so which goes first? The ones that block the southern sun? The ones dumping pine needles onto the roof? The ones preventing football happiness? We should get quotes back in the next few days, which should help narrow the options considerably. 🙂